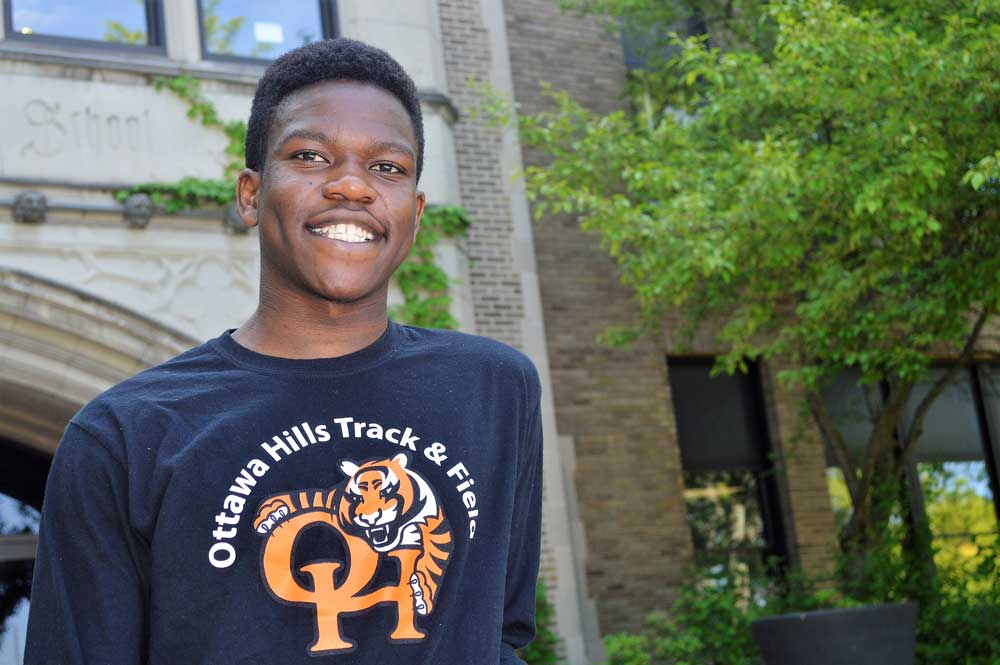 It was graduation day, and Jama Jafari Jama was in a bind. City High School commencement was that evening at Fountain Street Church. But first he had a race to run – the 800 meters in a regional track qualifier in Grand Haven.

There was no way he was missing the race, or the commencement.

His brother drove him to the meet, where he finished fourth, then brought him back to Grand Rapids, where he jumped in the shower.

“I was so busy, I hadn’t had time to iron my gown,” Jama recalled with a smile. His brother did that for him, and he got to the church in time to receive his diploma.

So ended that particular leg of a race he’s been running since he was born in a refugee camp in Kenya: the race to succeed.

“It truly felt great,” he said of walking across the stage at graduation. “It’s been a long time coming.”

The fire with which he’s run that lifelong race propelled him to earn excellent grades at the academically demanding City High. Jama has been through rough times, but he says nothing will stop him in the long journey now before him, starting with a scholarship at Aquinas College.

“I’ve always wanted to be the best at everything I do,” said Jama, exuding both confidence and humility. “Since I was a kid I’ve had that competitive nature. You can’t get anywhere if you’re not succeeding.”

‘He’s Taking Care of It’

Count Danielle Ralston as one who believes Jama will go far. City High’s head counselor has seen him overcome challenge after challenge since he was a seventh-grader at City.

“That kid has grit,” Ralston said. “In terms of work ethic, not wallowing in self-pity and accepting life’s challenges, whether it’s personal, whether it’s academic, whether it’s athletic – he’s taking care of it.

“Not only does he have the academic rigor, but behind that is a student you know you can take a risk on, because you know he’s going to succeed.”

Besides pulling roughly a 3.5 grade-point average at City, Jama made his mark as a runner for Ottawa Hills High School. He made all-conference as a junior on the cross country team, and was a standout in the 800 meters on the track team, narrowly missing all-conference. His top time was 1:58.13, an impressive clip though three seconds short of the school record he wanted to break.

Jama achieved those times by running 50 to 60 miles a week, displaying exceptional discipline and drive while maintaining his studies and holding down a job in the Spectrum Health kitchen, said Ottawa cross country and distance coach Dan Ebright.

“His ability to handle all of that and stay organized and still be successful in all areas is something for other students to take note of and see as an example,” Ebright said. “Jama is goal-oriented. He’s competitive, but he’s also a very easygoing person.”

Ebright thinks he can improve his times at Aquinas, where he’s signed onto the track team on an athletic scholarship. So does Jama.

“I can break records there,” he said, then made a quick mental jump beyond track. “Never stop looking forward. Once you fail at one thing, find another goal to reach.

Hopes to Help his Homeland

Jama plans to study business administration and accounting at Aquinas, to lay the groundwork for a business career. After establishing some kind of business in America, he envisions going back to Africa for a time to help create jobs.

“That’s always been a big dream of mine: go back home and make life better there,” Jama said, adding he would like to help his own family do better through his business. “At all times I’m thinking, how am I going to get my family on that path to success? I did not get here by myself. I got here together with them.”

He does not remember the Kenyan refugee camp where he was born, to which his parents had fled from war in their native Somalia. But he knows they were poor and that they came to America for the children. In a brief memoir, he wrote, “my parents, realizing it was too late to achieve their own dreams, saw it as the gateway to invest in a better life for my siblings and I.” He has four siblings, but says his mother had seven children who died from malnutrition and effects from the war.

He is mindful of how hard they worked, and that his father, Jafari, had to leave school in first grade in order to work and help his parents get by. “He’s always telling us, ‘I’ve been working hard all my life so you guys don’t have to work hard,’” Jama said.

The family immigrated to Grand Rapids when he was 3, resettled through help from the Catholic Church. Four years later, however, his parents divorced and he lived for a few years with his mother, Amina, in Buffalo, New York. He recalls it as a painful time, exacerbated by mental-health issues his mother struggled with.

“It sent a sharp pain to my heart and each day it was nailed in deeper,” he wrote in his memoir. He learned early on to avoid the pain by not talking about it and occupying himself with sports, “which gave me a sense of peace,” he wrote.

He moved back to Grand Rapids with his father in 2010, and didn’t see his mother again until several years later. He harbors hopes of helping her and growing closer, citing the maxim of his Islamic faith: “Heaven lies under the feet of your mother.”

He also hopes to gain U.S. citizenship, which he has begun the paperwork for, and which his father has obtained. Spurred by his urging to focus on school, the children have done well in school: older brother Hamadi, a graduate of East Kentwood High School; younger brother Musa, a student at City Middle; older sister Rehema, who attends Grand Valley State University; and younger sister Hawa, who will attend City-based Center for Economicology in the fall.

He credits City’s rigorous academics, International Baccalaureate program and public-service ethic for pushing him to do his best.

“Every single teacher here at City has provided a positive impact on me, and I’ll never forget that,” he said. “The whole program teaches you to think differently,” fostering students who “not only shine in the classroom but shine in the community.”

But he knows graduating just completes this lap of his life, and that it’s up to him to “actually get myself out in life” and build a successful future.

“There’s still so much for me to learn,” Jama said. “The world’s so vast. You can never stop learning.”